Judy became interested in art around the age six. Her great aunt was the director of the art department at a university. She came to visit the family and did aportrait of Judy and her twin sister while they sat and posed. Both sisters were fascinated by the drawing. They took every art class available in high school. They also became interested in foreign languages and studied Spanish and German. In college, theymajored in Spanish. Judy became a teacher. She taught bilingual kindergarten in a school district that had a tendency to be short materials. She used her art to create posters and teaching materials.
In addition to art, one of her favorite things to tell stories and to read storybooks to children. When she was learning to read, she collected all the Golden Books. She especially liked stories that relate to children’s perspective of experiences in life. After teaching kindergarten for twenty years, she felt she had a good idea of what children liked.
When she retired from teaching, her younger daughter Emily came to her and told her that she had written a story for a children’s book. She needed someone to do the illustrations. Due to her experience as a teacher, Judy instantly recognized the story as a good story and agreed to do the illustrations. In order to create the illustrations, Judy studied watercolor painting at the Hemet Valley art Association in a class taught by Barbara Parish. It resulted in the book titled Roger meets Sampublished in 2009. A second book titled Roger Learns to Paint was completed and published in 2016.
After telling stories to her granddaughter about some experiences she had when she was a child, Judy decided to write a book using some of her own experiences. She is currently working on authoring her first book. It will be a children’s picture book. It will be based on something that happened to her when she was five or six years old. She will also do all the illustrations.
​
. 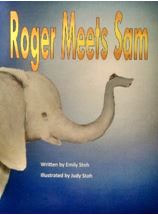 Roger Meets Sam
When a lonely baby elephant met a common garden spider, it was friendship. There was only l one problem: what will they play together? 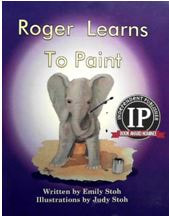 Roger Learns to Paint
A baby elephant name Roger and the spider named Sam are friends. One day the elephant was waiting for the spider to spin a ball of his silk so they could play together the game named silk ball that they invented. Roger picked up a stick and started to dig in the dirt. The zookeeper saw the elephant and thought maybe he would like to learn to paint. What could go wrong with that?