Author Luis Fuerte was the featured speaker for the High Desert Branch of the California Writers Club (HDCWC) on Saturday, July 9th. Fuerte is author of “Luis, Take a Look at This! My Time with Huell Howser.”
According to amazon.com, Huell Howser, the exuberant, hugely popular host of California’s Gold and other public-television shows, was always exclaiming to the camera in his Southern drawl, “Louie, take a look at this!” Three years after Howser’s death in 2013, Louie—aka Luis Fuerte, a five-time Emmy-winning cameraman—shared the stories of their adventures exploring California, making great television, and showcasing Howser’s infectious love for the Golden State.

During their twelve years together, Howser and Fuerte developed not just a great working relationship, but a true friendship. Genuinely interested in the people he interviewed and fascinated by the history of his adopted state, Howser led the way from the Mother Lode to the Inland Empire, and from Haight Street to Sunset Boulevard, as the duo uncovered everything that makes California special. Fuerte recounts some of their greatest discoveries, reveals the secrets of their success, and pays tribute to the man who struck gold wherever he looked.
​
Fuerte was born in San Bernardino and grew up in Colton. He graduated from Colton High School and served in the U.S Navy. He attended Valley College where he studied Telecommunications Engineering. Luis Fuerte has worked in all aspects of television and worked as a Cameraman for 40 years. Fuerte is winner of 5 Emmys, received an international monitor award, and the Golden mic for editing. He has received awards from the State of California and County of San Bernardino for speaking and helping young people achieve, and awards from press Photographers Association of Greater Los Angeles. He was honored as Latino of the Year in 2008, inducted into two Halls of Fame, and received the “Salt of the Earth” award in 2001.

WRITING THE STORY YOU ALWAYS WANTED TO TELL

The HDCWC, that normally meets at the Community Church at Jess Ranch, held their June 11, 2022, meeting at the Hesperia Library Community Room 9650 7th Avenue in Hesperia. The annual elections for HDCWC officers were conducted.

The program included HDCWC published authors Jenny Margotta, Jim Grayson, and Mike Apodaca teaching elements of how to tell the story you have always wanted to tell. Follow-up workshops are scheduled for three Monday evenings in July, August and September from 5pm to 7pmon July 25, August 29 and September 26. You do not have to be a member to attend these workshops.
​
Subsequent regular meetings will continue to be held on the second Saturday of each month at the Community Church at Jess Ranch in Apple Valley.

Jim Grayson, Ann Miner, Aileen Rochester, Roberta Smith, Jenny Margotta, Mike Raff, Judith Pfeffer, Rusty LaGrange for Diane Neil, Mary Langer Thompson (or one of the Poemsmiths), Anita Holmes and Dwight Norris are HDCWC members who read from their works at the May meeting at Jess Ranch Community Church in person and on Zoom.

JONATHAN MABERRY’S “THE GENRE OF YOU” 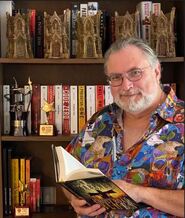 His novels include the Joe Ledger thriller series, Bewilderness, Ink, Glimpse, the Pine Deep Trilogy, the Rot & Ruin series, the Dead of Night series, Mars One, Ghostwalkers: A Deadlands Novel, Kagen the Damned, and many others, including his first epic fantasy, Kagen the Damned. He is the editor of many anthologies including The X-Files, Aliens: Bug Hunt, Don’t Turn Out the Lights, Aliens vs Predator: Ultimate Prey, Hardboiled Horror, Nights of the Living Dead (co-edited with George A. Romero), and others. His comics include Black Panther: Doom War, Captain America, Pandemica, Highway to Hell, Bad Blood and The Punisher.

Maberry is the president of the International Association of Media Tie-in Writers, and the editor of Weird Tales Magazine. His workshop, THE GENRE OF YOU, will draw on his experiences in writing in multiple genres as well as writing material that blurs genre distinctions. This embracing of cross-genre and multi-genre writing has been the foundation for a lucrative and satisfying career as a professional storyteller—and it’s a process any serious writer can follow. Visit with Jonathan Maberry online at www.jonathanmaberry.com
SATURDAY MARCH 12, 2022

​BOOKSTAGRAMMERS AND INFLUENCERS:
HOW TO FIND THEM, PITCH THEM AND
GET THEM TO REVIEW YOUR BOOK 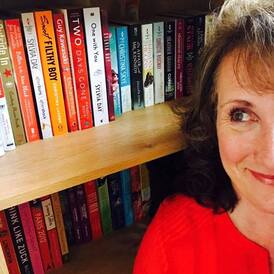 If you’ve ever wondered how to get to Bookstagrammers and bigger influencers, this class was for you!

If you’re ready to promote a new release or revive an already published title a pitch to online influencers and Bookstagrammers could be a major building block to your success.

But where do you start?

This class will break down the various types of “influencers” from bloggers, to Bookstagrammers and online media. We’ll dig into how to find them, how to pitch them, and how to get them to spread the word about your book!

Penny C. Sansevieri, Founder and CEO Author Marketing Experts, Inc., is a best-selling author and internationally recognized book marketing and media relations expert. She is an Adjunct Professor teaching Self-Publishing for NYU. She is the author of eighteen books, including From Book to Bestseller, How to Sell Your Books by the Truckload on Amazon, 5 Minute Book Marketing for Authors and How to Revise and Re-Release Your Book!

Four writers who are participants in the On-Topic Speakers for You project were featured speakers at the February 12 meeting. Jim Grayson, Emmalisa Hill, Joan Rudder Ward and Dwight Norris each presented different topics available through the speakers’ bureau created by HDCWC Programs/Publicity Chair Bob Isbill.

This presentation established the program’s ultimate goal which is to get our CWC writers “out there” to do public talks and sell their books. The website www.ontopicspeakers.com, populated by months of work by HDCWC Vice President and On Topic webmaster, Mike Apodaca, will be published in March 2022 and debut the first of many efforts to publicize our writers with something to say. Mike’s extraordinary contribution of IT expertise is another example of how our High Desert Branch thrives through membership volunteerism of their individual talents.

On-Topic Speakers for You is the collection of HDCWC members who have volunteered to participate in public speaking engagements for organizations needing guest speakers. The new website will offer those seeking keynote speakers the opportunity to select a speaker by a certain topic, and to contact that  particular presenter to arrange event presentation. The four presentations illustrate the variety of over fifty topics available on our website to organizations looking for guest speakers.  The topics are:

WHAT DO YOUR DREAMS MEAN? EmmaLisa Hill

How are we to understand our dreams? EmmaLisa will explain to you how to interpret your nightly fantasies.


HOW TO MAKE AN EFFECTIVE ORAL PRESENTATION THAT YOU CAN BE PROUD OF. Dwight Norris

Being capable of making an effective oral presentation separates the men from the boys and leaders from followers. When you can speak well before a live audience it changes your life in ways you can’t imagine. Winston Churchill said this. There is nothing like oratory. It turns a commoner into a king! Why not give it a try? When you know what to do, it’s not even hard!

Did you know you can take certain photos that will open the door to deeper meaning within yourself, help you achieve your goals and realize your dreams? Learn how you can use your cell phone as a tool to bring transformation in your life

THE SECRETS OF DE-ESCALATION Jim Grayson

How to transform conflict into calm. A peace officer’s journey. ​