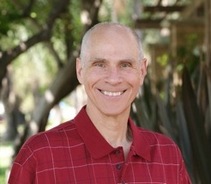 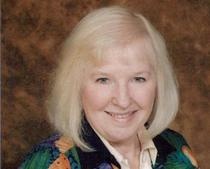 Sessions on Writing Topics of Interest.

A round table discussion is an excellent form of small group communicationwhen the “club” is going to be a long term engagement. Roundtable discussionsare extremely useful when it comes to learning, whether the learning be social, academic, related to hobbies or interests - such as writing.

During our November meeting the High desert California writers club offerred this opportunity. Those attending broke into smaller circles (groups) of 6-8 people for the first round for a set period of time. Discussions, questions, stories, ideas, different experiences and examples of writing, entering contests/festivals, writers block, first drafts, e-books, podcasts, sources for help, publishing, and other similar areas are some of the group categories to participate in.

Then when the cowbell rings, everyone will break and move to another group of their choice. There are 10 different topics . Each round will last about 15 minutes allowing you to participate in four or five topics.

There was a club member facilitator for each group who over-saw the flow of the interaction. It was a fun and easy-going experience and a great opportunity to know club members and guests a little better.  Some topics were: 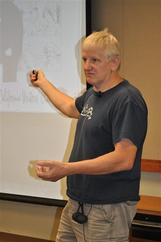 1. Four reasons why a blog is the social media platform of choice for writers.
2. Four biggest obstacles to getting a blog started.
3. Four key ingredients to attracting significant traffic to a blog/web site.
4. Four next steps every writer must take to bring attention to their work.

Belew has taken 10 different and unrelated blog topics to more than 1 million unique visitors each, and well over 50 million views overall.He has two published books, and has addressed Mexico’s largest Writers’ Conference, Asia’s Largest Publishing Convention, and has spoken in Thailand, New York City, as well as to many of the California Writers Club branches. 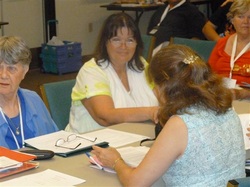 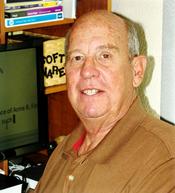 Presented at the Hesperia Library 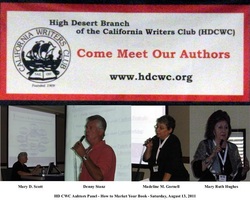 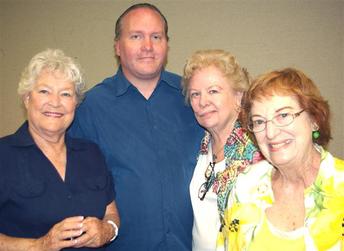 Ann Heimback, Thomas Kier, Suzanne Holbrook-Brumbaugh and Dianne Neil presented excerpts from their writing in an "open mic" forum at the June meeting.

Elections were conducted and the results were as follows:

Dr. Freddi Gold has been appointed Vice President to take effect immediately to fill the current vacancy of that office.  Incumbents Bob Isbill and Naomi Ward will resume their duties and Treasurer elect Jenny Margotta will begin serving on the HD CWC Board on July 1, 2011.

Member at Large Mary Langer Thompson has been reappointed to serve as the fifth voting member of the Executive Board. 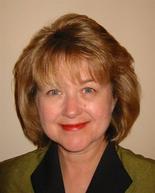 "Poetry from the Head and the Heart and a Few Other Places".

Presented at the Hesperia Library 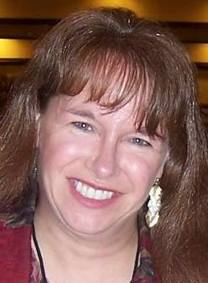 Before Holly was married, she wrote short stories under her maiden name, Holly Thomas, with sales to Woman's World, Weird Tales and Amazing Stories. Since becoming a wife and mom, Holly has sold two romance novels under the pen name Sierra Donovan (also her children's names). A member of the HD CWC critique group, Holly is now working on a newromance. She also writes freelance articles for the Victorville Daily Press.

Her books are available through Amazon.com and barnesandnoble.com 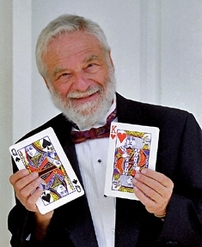 Born in Philadelphia, Pa., Gerald Schiller received his B.S. in Education from Temple University, then moved to California where he received his M.A. from UCLA in the Motion Picture Department.He went on to write and direct a number of award-winning educational and documentary films, several of which (The Movies' Story, Chaplin-ACharacter is Born and Keaton-The Great Stone Face) continue to be shown on television throughout the world.


Author of 9 books and over 100 articles 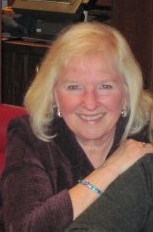 Dr. Freddi Gold (her doctorate is in Human Behavior) has a Masters in Clinical Psychology and another in Theatre Arts & Speech.  She is a member of the High Desert Branch of the CWC.

Licensed Marriage and Family Therapist, Clinical Hypnotherapist and Certified Life & Wellness Coach, Freddi Gold also has taught for over 20 years at Victor Valley College and Chaffey College in the Communication Studies Department. She teaches classes in Family Communication, Interpersonal Communication, Small Group Communication and Public Speaking. She previously has hosted her own radio and television shows here in the High Desert, interviewing notables in the areas of medicine, psychology and other areas of public interest. 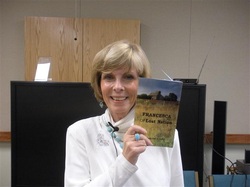 Lucinda Sue Crosby is an award-winning journalist as well as a published and recorded Nashville songwriter. She's also co-written four tele-films. Her first novel, "Francesca of Lost Nation, - a Hollywood Book Festival Honorable Mention for General Fiction - was released in 2010, and is now available online and at book signing events.