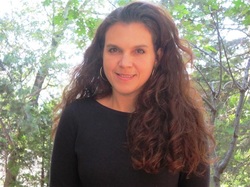 She's also contributed a piece for the anthology Naming the World and Other Exercises for the Creative Writer.  Priamos teaches English and Creative Writing at California State University, San Bernardino.

The mysterious death of a high-profile defense lawyer propels his Daughter into an investigation of the shady deals and characters that led to his disbarment.  This detective L.A. noir memoir paints a vivid portrait of a Greek American family caught up in the scandal-obsessed, drug-addicted culture of Southern California.


What people are saying about this book:


"In her gripping, big-hearted, and sometimes harrowing memoir, Paula Priamos searches for meaning in the life - and mysterious death - of her beloved, larger-than-life father.  Along the way, Priamos proves herself to be notonly a keen observer of the ways we love and bear loss, but also a first-rate storyteller.  The Shyster's Daughter will be with me for a long time."           - Will Allison, New York Times bestselling author of Long Drive Home and What You Have Left


"In The Shyster's Daughter Priamos peers into the motivations of her family members with a rare and enticing frankness that distinguishes her work from that of other memoirists."        - ZYZZYVA literary journal


"Priamos's ambitious and successful effort to meld two stories happens in a book called The Shyster's Daughter where she performs the big leap over timidity and skepticism to make her own life story a bigger one indeed...a self-described noir detective memoir, something evoking Nathaneal West  or Joan Didion."      - O.C. Weekly

Ehrich Van Lowe will be speaking to us at our regular November meeting!

As a novelist, Ehrich has written two classic 80s horror novels under the Pseudonym, Sal Conte: “Child’s Play” and “The Power.”  As E. Van Lowe, he has launched a new career writing novels for teens, employing a unique style of combining horror with humor.  His first teen novel, “Never Slow Dance With A Zombie” was published by TOR/Teen, September 2009.   The hit novel was chosen as a selection of the Scholastic Book Club.  It has also garnered an ALA Award and Cyblis Award nomination.

Ehrich holds an MFA in Professional Writing from the University of Southern California. In 1997 he became a proud member of the faculty where he taught various forms of writing for eleven years.

The public is welcome. 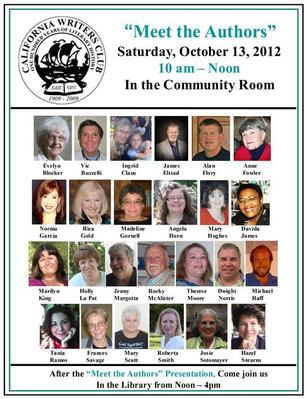 Our published authors "pitched" their books. Each author had only two minutes to tell their story. Great practice and great fun. Organized by Mary Scott. 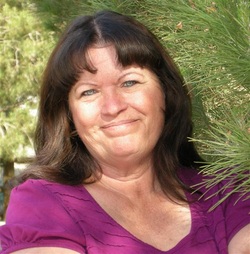 Marilyn presented how to organize your data before beginning to write.
Character Development
Setting
Research

Anne (A.B.) Fowler, author of “The Jesuit Papers”, and Mary D. Scott, author of “Spirit Driven Events” and “How To Market Your Book” presented a free two-part workshop on “How To Write A Pitch” for the High Desert Branch of the California Writers Club.

The purpose of the workshop was to help those who have completed novels, non-fiction books, or screenplays or those who intend to write such projects to pitch their work to people in position to buy and/or produce such things.  The members and guests were taught how to create a specific pitch of their own. 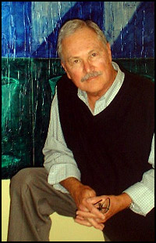 Ken Rotcop, the acknowledged Grand Master of Pitching, is the creator and owner of PitchMart— Hollywood’s biggest screenplay pitch event for writers and development executives.

His screenwriting workshop was the subject of a feature-length documentary,Talk Fast, which has won various film festival awards. STARZ network produced a two-part series on Ken Rotcop, Pitching Guru.

As a screenwriter, Rotcop’s most prestigious production (which he both wrote and produced) was For Us, the Living: The Story of Medger Evers which starred Laurence Fishburne. Among the honors the film received were the Writers Guild Award, the Neil Simon Award, and the NAACP Image Award.

February 11, 2012 - Martin Lastrapes
author of
Inside the Outside

Character Development:
How To Create the
Illusion of
Flesh and Blood on the Page

Roberta Smith, club member and author of the Mickey McCoy Paranormal Mystery Series, showed a packed house how they could self publish their projects without spending a lot of money with CreateSpace.  Find her presentation here.