DECEMBER 12, 2020 MEETING BY ZOOM
BOOK PROMOTIONS AS A COMPONENT OF YOUR MARKETING STRATEGY 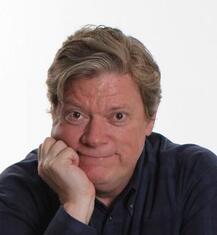 Mike O'Mary is Co-Founder of LitNuts with daughter and business partner, Kathleen Myer


Drawing on his experience as co-founder of the LitNuts e-newsletter and owner of an indie press, Mike will provide an overview of the book e-newsletter industry and advice on strategic use of e-newsletters and websites that promote books -- including which ones are worth your time and money and which ones aren't. You'll come away with a better understanding of how to use these marketing vehicles to get more sales, reader reviews and positive word-of-mouth.


About LitNuts
LitNuts was created to bring the “Best of the Indies” to booklovers. Subscribers get a free newsletter about books from indie publishers that you may not find in other newsletters. Authors and publishers get an affordable way to share their work with engaged readers. LitNuts was founded by the daughter/father team of Kathleen Meyer and Mike O’Mary, and is a Publishing Partner with the Independent Book Publishers Association.
​

NOVEMBER 14, 2020 MEETING BY ZOOM
​TAKING CONTROL OF YOUR WRITING SUCCESS 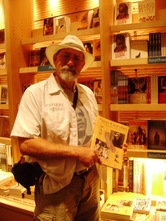 An ink stained wretch, Fred Dodsworth spent most of the last thirty years in newsrooms picking fights with mayors, police chiefs, and editors. He lost most fights, but notches on his belt include one police chief, one mayor and numerous politicians.  He writes poetry because there’s more truth to be found in poetry than any news story. His stories and poems have been published in Red Light Lit, Rag Mag, Troop, Oakland Review #3, riverbabble, Transfer, Milvia Street, Bay Area Generations, Writing Without Walls, Saturday Night Special, Something Worth Revising, US Represented, 11-9 the Fall of Democracy, RISE!, Colossus:Home, and others.
​
Fred Dodsworth, State Representative for the Berkeley Branch of the California Writers Club, created and has led a writing group who has been together for the last five years Dodsworth edited the latest 2020 CWC Literary Review, and was in charge of art direction and production of  the publication.
“Taking Control” will include Dodsworth’s views on critique groups, building a writing community, and design and layout of your books.


Here he is pictured at the Smithsonian’s National Museum of the American Indian in Washington, DC, with one of the three books on California’s Native Peoples he edited, art directed, and packaged for Dolan Eargle/Trees Press at the request of the Smithsonian.
​​

OCTOBER 10, 2020 MEETING BY ZOOM
​HOW TO FIND & ENGAGE WITH READERS FOR YOUR BOOKS

Writers want readers. It's that simple.

Since launching their Growing Up Aimi Series (1300+ pages) in March of 2020, Bill & Mia Belew books have been downloaded more than 5,500 times (and growing daily).

Bill gets into the practical steps of getting eyeballs on your books by building a subscriber base that is engaged with a newsletter that is about you, your brand and your books.

The steps to take are FREE and they WORK ... but it's still work.

Bill served as a communications and intelligence officer in the US Navy. Following that experience he served as a tent-making missionary in Japan for nearly 20 years. In his 3rd career, he lived in Silicon Valley where he paid his sizable mortgage as a professional blogger, garnering more than 150 million views. No kidding. He was eventually dragged into serving companies wanting to build their online brands after too many inquiries as to, "How did you do that?" Bill has taught content marketing from SF to NYC to Bangkok to Singapore to Shanghai and back for multinational companies as well as aspiring authors. He holds an MFA in Creative Nonfiction.
Mia is a 7th grader at a leading edge project-based, self-paced public charter school in Silicon Valley. Her first seven years of school were in private Christian schools in the heartland of a start-up culture. She loves to read chapter books about fantasy, adventure, Greek & Roman mythology. She can read non-stop for hours and hours. After schooling, Mia wants to become a Peace Corps volunteer, teach at DoD institutions around the world, become an Imagineer or maybe all of these.

Bill is a disabled veteran of the Cold War. You can read (for FREE) the true story of how he may have been responsible for Bringing Down the Soviet Empire. <= take a look.

You can also read (for FREE) prequels about Mia to the GUA Series - Growing Up Princess and By Cows Who Chew Lilies <= click to read.

Frustrated by a lack of books for preteens that challenge the young reader with new vocabulary and ideas worth thinking but without diving into mature content, Bill and Mia teamed up to write their own series of books.


Their books focus on true-to-life adventures and challenges of preteens and tweens. No time warps, mythical characters or romance. Their books can be read alone, in a readers group or as devotional guides with parent or grandparent and child reading together and discussing points brought up in each chapter - have you ever felt betrayed, do you have questions you want to ask God ... Or, readers can just dive in and enjoy.

The High Desert Branch of the California Writers Club (HDCWC),hosted Literary Attorney and Agent, Paul S. Levine. Levine was guest speaker at our July 2020 meeting, and proved to be especially popular with the authors attending. 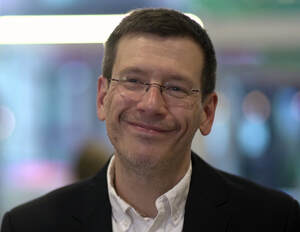 Jeff Somers (www.jeffreysomers.com) began writing by court order as an attempt to steer his creative impulses away from engineering genetic grotesqueries. His feeble memory makes every day a joyous adventure of discovery and adventure even as it destroys personal relationships, and his weakness for adorable furry creatures leaves him with many cats. He has published nine novels, including the Avery Cates Series of noir-science fiction novels from Orbit Books (www.avery-cates.com), the darkly hilarious crime novel Chum from Tyrus Books, and most recently tales of blood magic and short cons in the Ustari Cycle, including the novel We Are Not Good People and the novellas Fixer, The Stringer, Last Best Day, and The Boom Bands from Pocket Gallery (www.wearenotgoodpeople.com). He has published over forty short stories, including “Ringing the Changes,” which was selected for inclusion in Best American Mystery Stories 2006, “Sift, Almost Invisible, Through,” which appeared in the anthology Crimes by Moonlight edited by Charlaine Harris, “Three Cups of Tea,” which appeared in the anthology Hanzai Japan, “The Company I Keep,” which appeared in the anthology Life is Short and Then You Die edited by Kelley Armstrong, and “Zilla, 2015,” published in 2019 by the Lascaux Review. He also writes about books for BookBub and about the craft of writing for Writer’s Digest, which published his book on the craft of writing Writing Without Rules in 2018. He lives in Hoboken with his wife, The Duchess, and their cats. He considers pants to always be optional.
JULY 2020 MEETING BY ZOOM
​FEATURED OPEN MIC
Anita Holmes
Ann Miner
Mike Apodaca
Jenny Margotta
Lorelei Kay
Diane Neil
Dwight Norris
Peg Pawlak
Mary Langer Thompson
Michael Raff

Renowned literary attorney and agent Paul S Levine spoke with members via Zoom. He has more than 30 years experience representing writers. actors, directors and producers in the entertainment industry and many. His services include trademark and copyright infringements; collaboration agreements; screenplay agreements from existing books, and selling books to publishers for book authors.

Levine began his career as an associate attorney at the Law Office of Stephen F. Rohde, where he specialized in business transactions and civil litigation, with an emphasis on trademark, copyright, unfair competition, trade secrets, book publishing, and the rights of privacy and publicity for some six years. Then, answering a “blind” advertisement in the Hollywood Reporter, he went to work for over three years for the Business and Legal Affairs Departments of Warner Bros. Television, where he negotiated and drafted agreements for all above-the-line personnel (writers, directors, actors, and producers) for network and cable television programming. He was then recruited to the now-defunct Hearst Entertainment Productions, where he spent two years as Resident Counsel, negotiating and drafting agreements for all above-the-line personnel in production and distribution of made-for-television movies, first-run development, television series, and documentary programming.

In 1992, Levine established his solo entertainment law practice, first in Santa Monica, then in Venice, California. He has practiced entertainment law for over 30 years. He founded the Paul S. Levine Literary Agency in 1998, and has been instrumental in selling over 150 books for authors.
​

March, april, may 2020 meetings at the church were cancelled 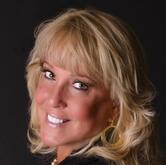 Krusemark is an adjunct online Professor of Publishing for Harvard as well as one thousand other facilities worldwide. She is a nationwide inspirational speaker on the topic. She is also a former journalist, editor, and managing editor of newspapers, as well as an author of many magazine articles and several business books.
​
JANUARY 2020 was cancelled